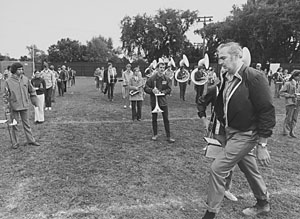 The Packers do not have their own band, color guard, or cheerleaders — all of those groups throughout the years have been supplied by either the UWGB or St. Norbert College. In the University of Wisconsin Green Bay digital archives, there is an interview of a former UWGB marching band member Marilyn McCarey. She has fond memories of her experience in the band and references some of the times the band got to play for the Packers. “The Pep Band played for basketball games, but here in Green Bay, it was a full season of rehearsals to march at one, and I believe one year we actually did march at two games. But. And I could be mistaken on that, but that was the highlight: was that we were able to march at Lambeau Field for the Packers, and we had our own full dress. Sure, we had some beautiful uniforms. And we were talented.” According to a Green Bay Press Gazette article, the Packers pledged $24,000 to helped kick-start the UWGB marching band and color guard programs. The funds were used to purchase new instruments and uniforms, and after the band and color guard programs were developed, they played and performed at Packer games in Green Bay and Milwaukee. Unfortunately, the band did not last forever, and only the cheer 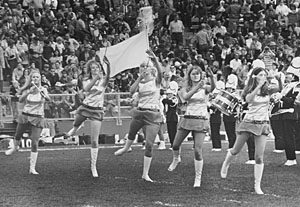 leaders remain active today. However, the Packers’ great generosity and support of our music program during the birth of UWGB is definitely notable.