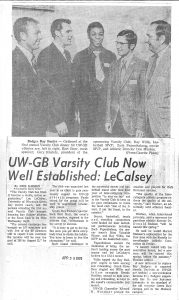 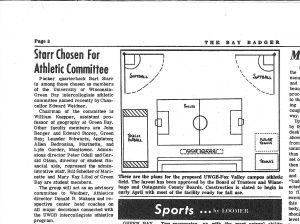 In April of 1970, The Varsity Club at UWGB had become a viable organization and held their first annual Varsity Club dinner. To show the Packers support of how well UWGB had put together their sports teams, Packers quarterback at the time, Bart Starr, had attended the dinner. Starr had given a speech to close the dinner. He was quoted as saying, “Enthusiasm is the key to success, and it is easy to get to the top. But once you get there, everybody tries to shake the ladder.” The UWGB soccer team recorded a winning 12-2-2 record, while the basketball team was able to win 16 out of their 18 games. Starr was chosen to be on the UWGB athletic committee around this time.