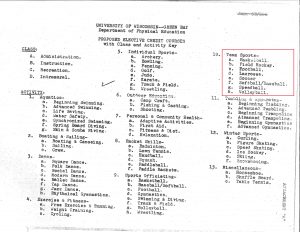 the enrollment of 20,000 students. However, evidence shows that over the course of 1968 the administration became less and less certain about the sports that were going to be offered at the school and therefore less and less confident about the layout of the school. The decision appears to have been a gradual one, with no binding contract between the Packers and the school, only friendly advice as to how to get our university on its feet.