Lyle Lahey was most well known for his role at The Green Bay News-Chronicle as editorial cartoonist from 1976 to 1996.1His cartoons were memorable for many reasons but most notable was their satirical nature and sharp-tongued humor. In his time at the Green Bay News-Chronicle, he was also the editor for the commentary pages, but his cartoons had been featured in the Chronicle dating back to 1968. In his youth Lahey served in the U.S. Army during the Korean war, citing one tour from 1954 to 1956.2

At UW- Madison he contributed to the student newspaper, The Daily Cardinal, as well as serving as the art editor for UW – Green Bay’s student paper, The Bay Badger.3After his official departure from his position at the News-Chronicle, several of his Packer-specific cartoons that were featured in the Chronicle was published in 1997 in a collection entitled, The Packer Chronicles.

Prior to his more well-known career working in print, Lahey found his start at Green Bay’s WBAY-TV working for thirteen years as a promotion manager.4Lahey continued to appear in the News-Chronicle until its closing in 2005. 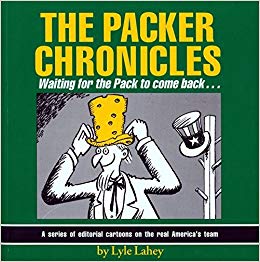 Following the closing of the News-Chronicle, Lahey developed his personal website where he continued to publish political cartoons until his death in 2013 at the age of 81. Lahey lived in Allouez for most of his life and was survived by his three children as well as his wife, Carol.

The Packer Chronicles: Waiting for the Pack to Come Back (Published in 1997 by Lyle Lahey)5