With the franchise on the line, Green Bay was given a choice: to fund a new stadium or lose their team.

Four days before the vote took place, NFL commissioner Bert Bell had some words of warning to the citizens of Green Bay.  Essentially, his letter to the Press-Gazette stated that if the referendum doesn’t pass, there will be no more Packers in Green Bay.

“There is no doubt in my mind that the Green Bay Packers could sell their franchise (God forbid) for a maximum of three quarters of a million dollars. Therefore, it is my opinion that it would be good business judgment on the part of the citizens of Green Bay to approve the referendum for a new stadium.” 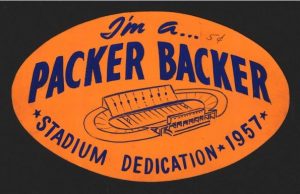 The same day, the Packers received some help from an unlikely source.  George Halas, the head coach of the Chicago Bears reiterated the same message, although he communicated face-to-face at the Columbus Club in Green Bay.  Alongside other sports icons, (including Johnny “Blood” McNally, Curly Lambeau, and Tony Canadeo) Halas persuaded the people of Green Bay to vote “yes” on the referendum by pressing, “The best way for you to guarantee the current and future success of the Packers is to build the new stadium─ a place where your team can grow and flourish in the future, just has it has grown and flourished here in Green Bay from the earliest days of professional football.” (Press-Gazette)

With more than just the City of Green Bay behind them, the $960,000 referendum passed by a substantial margin: 11,575 to 4,893.  Afterwards, Bert Bell chimed in, dubbing the decision the “Greatest thing I’ve heard of in sports.”  In the same article, he added, “I personally want to congratulate the city of Green Bay on behalf of myself and every team in the league.  It was a terrific effort, but that’s Green Bay tradition, and down through the years you can’t beat that tradition and loyalty.” (Press-Gazette)  And just as they have through the history of the Packers, the fans came through to help the team survive.