With Green Bay buzzing about a new stadium, many people wanted to help in their own way, including the businessmen of the community. A group called the Minutemen were comprised of business leaders of the day that devoted their time off to help fund multiple sports organizations including the Packers. While their main focus seemed to be raising money for high school football teams. Many among them were deeply apart of the Packers organization as well, one of them being Jerry Atkinson who served on the Packers Board of Directors for 45 years. 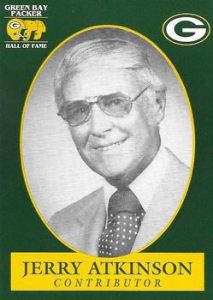 Since most of the members of the minutemen were business owners, quite a few joined committees such as the Citizen’s Committee on the New Stadium that was made up of store owners from the Broadway Hotel, Platten Radio, Carl Zoll Cut Stone, and Prange Department Store to name a few. The Citizen’s committee for the New Stadium’s main goal was to educate the citizens of Green Bay on the need for the stadium and the benefits of building a new stadium, in order to gain support for the referendum. One way that the committee helped to educate the citizens was by making pamphlets and spreading them throughout the city. (GB Press Gazette) The minutemen were large supporters of the new stadium, possibly also because of the extra revenue it would bring to the area and surrounding businesses. According to Wisconsin Policy Research Institution Report: The Green Bay Packers: America’s Only Not-for-Profit, Major-League Sports Franchise written by Daniel J. Alesch, Ph.D., Lambeau Field brings in approximately $830,000 every home game and only $270,000 is spent in game which leaves $600,000 going into the community. This makes it a win-win for business owners getting extra revenue and the Packers who receive full support from the Green Bay community. See After the Fact