At the beginning of the 1950s, the Green Bay Packers were in some financial trouble, Green Bay soon realized that finances would become a constant struggle throughout the 1950s. Beginning with the debt and Curly Lambeau abrupt departure from the Green Bay Packers, only added to their troubles. Luckily, through the city and the fans help they could raise enough money to stay in the NFL.

By the end of 1951, the Packers had lost $18,000 due to their terrible season: 3-9. Thankfully, due to the rise of the TV, the Packers could get some money from big TV companies like CBS. Even then, the Green Bay Packers barely received anything from these contracts. CBS paid 1.8 million per year to televise games; the teams that received the most airtime benefitted from the contracts the most. Unfortunately, because of Green Bay’s losing streak, they received little airtime and thus little revenue from the television. 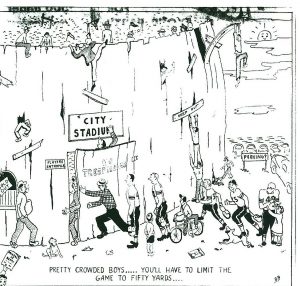 The next obstacle that stood in the Green Bay Packers way, was a conflict within the state; between 1952-1957 the Packers played more and more games in the Milwaukee County Stadium; and ended up playing half of their seasons in the County Stadium. With the Packers in Milwaukee, the city suggested renaming the Green Bay Packers to the Wisconsin Packers; that’s when the people of Green Bay and the city jumped in to support their beloved Packers. The city proposed if the Packers paid half, the city would help pay for the new city stadium. When the bond was approved by the citizens of Green Bay by a two to one vote, the city gave 960,000$ to the new stadium; to ensure the Packers would stay in Green Bay. 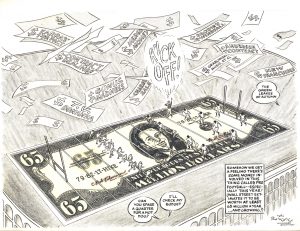 When the 1950s came to a close, the Packers luck turned around. In 1959 the Packers brought home a 7-5 season total, their first winning record in 12 years. That was the first year Vince Lombardi coached the team as well. In 1958 the Packers earned a profit of $37,300 in profits and in 1959 their profits jumped up to $75,208. Then in 1964 the Packers profits were $404,730 in profits, almost three times the amount that they earned in 1963. The Packers profits and airtime would continue to rise throughout the 60s, thanks to the success of Lombardi.