The Packers have always had some of the most loyal fans, and that is shown throughout Packers history. One of the most notable times starts at the end of 1949 when Curly Lambeau quit. With no coach, debt, and a small franchise, the Packers were threatened by the NFL to be cast out from the league, unless they could raise $120,000. The NFL believed that other teams could benefit from Wisconsin pulling out of the league and that the Packers had become burden. The Packers played in the smallest stadium with the cheapest tickets, making them the least profitable team within the league. 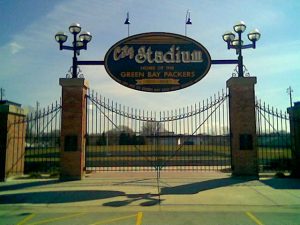 To raise the money the Packers started to sell shares for 25 dollars a piece, they put a limitation on how many shares one person could by, so no one gained control of the league. On April 12th, 1950 they hosted a pep rally to sell shares at the local high school and raised over $25,000. For the next month, they could gather over 400 volunteers to go door to door and sell the shares. When the Green Bay Press-Gazette did an article on the sale one journalist wrote; “We feel certain that the public will never let the fighting Packers down.” The Packers managed to avoid the cut and stayed in the league.

Later, during the 1954 season, the Packers lost their first three games but ended up coming back and claiming victory over the next three. When the team returned home to Green Bay they were greeted by 10,000 roaring fans and a pep band at the airport.

During in mid 1960s a new league and branch of football started to take form. This new leagued named itself the “American Football League” and it was owned and controlled by wealthy businessmen who were turned away by the NFL. The AFL started to create teams in different cities to build up their league. This started to worry the people of Green Bay due to the fact that the AFL was showing interest in putting a team in Milwaukee; recently Milwaukee lost the Braves, a baseball team, to Atlanta. Packer fans were unnerved by the AFL and the thought that their beloved team and Lombardi might move to a bigger city. Controversy struck when business man named Marv Fishman started to pitch the idea about two teams in Wisconsin and the revenue that it would bring in. To force the AFL to abandon the expansion idea in Milwaukee Vince Lombardi signed exclusive rights with the Milwaukee County Stadium until 1975. Lombardi not only had the public’s support but the public officials support to keep Wisconsin a one football team; the Packers. 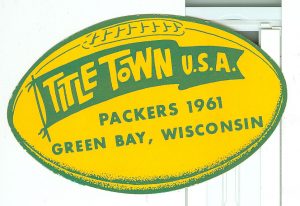 The 1950s was one of the biggest uphill battles that the Green Bay Packers have ever faced; constantly worrying about being cut from the NFL, the growing losing streak and the rotting Old City Stadium were all factors that the Packers had to face head on. Throughout some of the worst seasons in Packer history the fans were there for them. They were there to cheer them on every time they won, they were there to pick them back up every time they lost. Most people credit Vince Lombardi for bring the Packers back, and that is true, but the fans were there to keep them alive and standing in their darkest moments. Then in the 1960s Vince Lombardi became a figurehead of what the Green Bay Packers and their fans were all about: dedication and loyalty. Vince Lombardi gave the Packers their household name back, but the fans were still there at every game, every obstacle and every triumph.