The Green Bay Packers have always been considered one of the founders of the NFL with the team starting back in 1919, back then the Packers were a highly respected team amongst the other teams within the league, but as time moved forward the smaller franchises slowly started to die out and new, bigger franchises took their place. This left the Green Bay Packers being one of the smallest franchises, with the cheapest tickets and most outdated equipment.

The 1950s was the Green Bay Packers biggest test, during the early 1950s the Packers were rudderless due to Curly Lambeau

leaving and in debt. To add to the stress that has been placed on the franchise the NFL believed that the Packers had become more of a liability than a revenue source, to stay in the league the Packers were forced to raise over a $100,000. The other problem was their stadium located in the east side of Green Bay. The City Stadium had become worn down, and with the lack of guest locker rooms, not enough seating and parking; not to mention the aging frames. So, the Green Bay Packers started to play more constantly at the Milwaukee County Stadium. Back when the City Stadium was constructed it was the pride and joy of the Green Bay Packers, and every other team in the NFL envied the luxury the stadium brought, but with the newer, richer franchises piling in the league the more luxurious other teams stadiums became.

Now Despite all of these obstacles that stood in Green Bays way, the fans and citizens of Green Bay never once abandoned them. When they had debt the fans volunteered their time and helped them sell shares or help set up pep rallies. Then when the Green Bay Packers were playing half of their games in the Milwaukee County Stadium the city came together and passed a bond to construct a New City 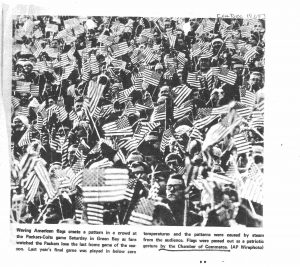 Stadium, so the Packers and the infectious energy they brought could stay in Green Bay; where they rightfully belonged. During some of the worst seasons in Packer history the fans were there to get rowdy every time they scored and were there to pick up their spirits when their defense slipped.

The Packers long overdue luck came to them when the Green Bay Packers struck a deal with the New York Giants to sign on Vince Lombardi as the head coach for the Packers until the Giants needed him back. From the moment Lombardi stepped on the field, he got the players, the franchise and the fans on the same page. He demonstrated and stood for everything that fans stood for. There was no one, no player who wasn’t free from Lombardi’s tough coaching style; Lombardi would do whatever it took to turn the Packers into the winning team that they were meant to be. Under Lombardi’s leadership the Green Bay Packers intimidated their opponent, and not only that, but they became the dominating team in the NFL for the next decade.